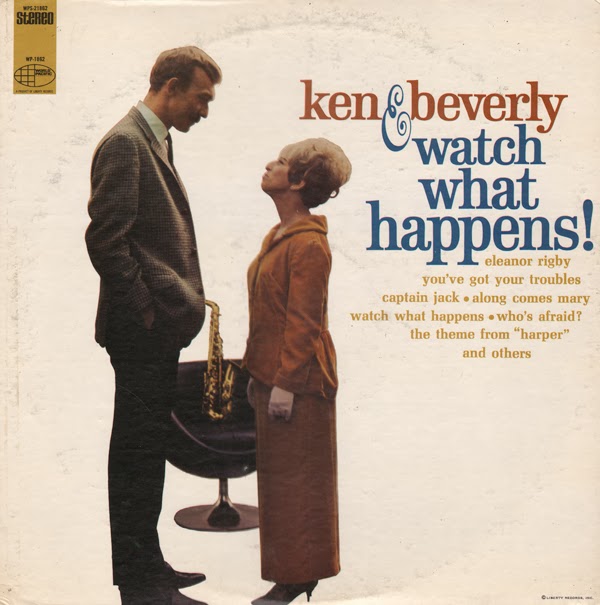 Not sure what happened to the artists after making this record. They did create a nice "lounge" sound, a blend of jazz and pop for this LP, which seemed to have been their aim (see below).

From the back cover: Ken (Jensen) and Beverly (Ryman) started their careers separately, but had one important element in common; the combination of talent and early formal training. Ken's musical career was launched in Klamath Falls, Oregom, where, under the guidance of his father, a music teacher, he became one of the finest young musicians in the country, In 1956, as a high school senior, he held the first-chair oboe position in the all-national high school orchestra. In college, Ken majored in music and the freedom of the college atmosphere nourished his interest in jazz; an interest that landed him in Los Angeles in 1961. He toured with various rock and jazz combos and big bands. While the one-nighters from coast-to-coast gave him valuable experience with the going and growing sounds of the times, and permitted relatively "surreptitious" experimentation with alto, baritone and oboe, they also confirmed a continually growing desire to develop a sound of his own. Ken met Beverly at a recording session in 1963, they dug each other's sound and started working together.

Beverly was a natural. She started singing at the age of six, and by the time she was eleven she was singing on the radio in Los Angeles. She would sing almost anything, almost anywhere, but it soon became apparent that her engaging warmth and infallible feeling for tempo and rhythm favored jazz and popular styling. She sang with the Van Nuys High School dance band and then spent the next few years singing whenever possible and "sitting-in" at various clubs around town, including the "Summit," where she sang with Cal Tjader. Then from that first fortuitous meeting till now, Ken and Beverly have been working together, building and blending their ideas and talents toward the happy marriage of sounds on this album.

The Face I Love
Theme From Harper
Who's Afraid
Scheherazade
A Man And A Woman
Captain Jack
Eleanor Rigby
Watch What Happens
You've Got Your Troubles
Nothing Left To Do Buy Follow You
You're Gonna Hear From Me
Holly Golightly
Posted by By Mark Betcher at 10:03 AM