Big Bold And Brassy - Enoch Light And The Light Brigade 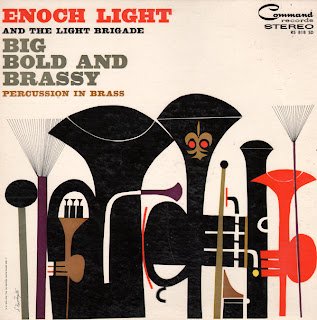 From Billboard - February 13, 1961: Enoch Light and the Light Brigade are back in another entrancing and exciting stereo album. This time the Light crew features bright, breezy brass percussion instead of bongos, et. al., but it still makes for a mighty tasty musical album and a solid buy for stereo fans. The marches especially, such as "Colonel Bogey," "American Patrol" and "Parade of the Wooden Soldiers" and "Rambling Wreck From Georgia Tech," are a gas. This could be another best seller for the Enoch Light gang.

Great Day
Theme From The Apartment
Rachmaninoff Prelude In C#m
Whiffenpoof Song
Coloney Bogey
No Rest For The Drummer Man
American Patrol
Lullaby Of Broadway
Wabash Blues
Parade Of The Wooden Soldiers
When Yuba Plays The Rhumba On The Tuba
Rambling Wreck From Georgia Tech
Posted by By Mark Betcher at 6:45 AM