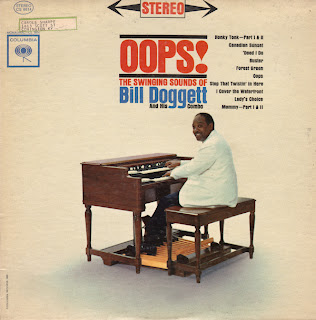 From the back cover: For the past nine years, Bill Doggett and a Hammon Organ have been transported about the country as the major cargo of a six-passenger bus. On at least 250 nights out of each year, the bus has parked outside of a dance hall somewhere between Vancouver and Orlando, Doggett and crew have unloaded and for the next four hours, hundreds of people have danced and smiled, laughed and sung to the accompaniment of the kind of music you hear on this album.

At the age of 22, Philadelphia-born Bill Doggett was a pianist leading his own band. He worked with the Lucky Millinder band in 1940 and was pianist for the Ink Spots from 1942 to 1944. Later, he worked with Louis Jordan, and in 1951 he took up the organ. Bill then worked with Ella Fitzgerald and has written arrangements for one of the vocalist's recent albums.
Posted by By Mark Betcher at 4:04 AM