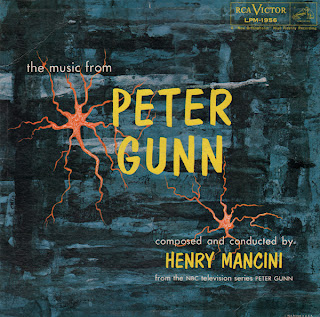 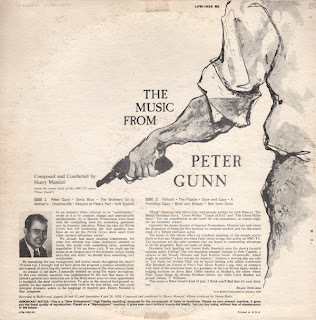 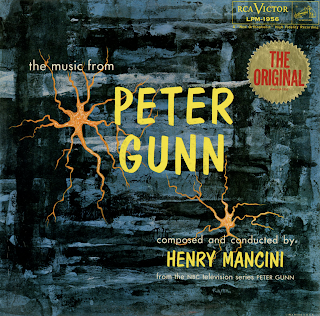 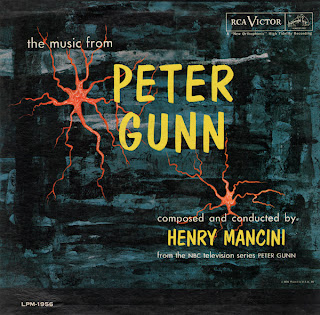 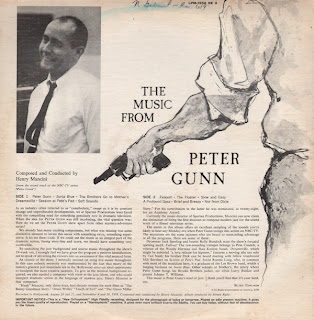 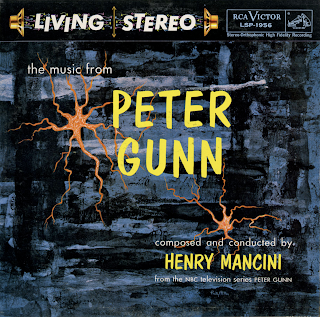 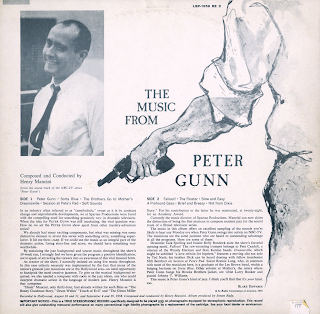 From the back cover: "Hank" Mancini, only thirty-four, had already written for such films as "the Benny Goodman Story," Orson Wells' "Touch Of Evil" and "The Glenn Miller Story." For his contribution to the latter he was nominated, at twenty-eight, for an Academy Award.

Currently the music director of Spartan Productions, Mancini can now claim the distinction of being the first  musician to compose modern jazz for the sound track of a filmed television series.

The music in this album offers an excellent sampling of the sounds you've likely to hear any Monday eve when Peter Gunn swings into action on NBC-TV. The musicians are the same jazzmen who are heard to outstanding advantage in all the programs. Here are some of them:

Drummer Jack Sperling and bassist Rollt Bundock state the show's forceful opening motif, Fallout! The raw-sounding trumpet belongs to Pete Candoli, a veteran of the Woody Herman and Stan Kenton bands. Dreamsville, which might be subtitled "a love refrain for hipsters," features a moving alto sax solo by Ted Nash; his brother Dick can  be heard dusting with fellow trombonist Milt Bernhart on Session At Pete's Pad. Saxist Ronnie Lang, who, in common with most of the musician here, is a graduate of the Les Brown band, wields a bulging baritone on Sorta Blue, Other soloists at Mother's, the nitery where Peter Gunn hangs his Brooks Brothers jacket, are vibist Larry Bunker and pianist Johnny T. Williams. – Blake Edwards

Peter Gunn
Sorta Blue
The Brothers Go To Mother's
Dreamsville
Session At Pete's Pad
Soft Sounds
Fallout!
The Floater
Slow And Easy
A Profound Gabs
Brief And Breezy
Not From Dixie
Posted by By Mark Betcher at 7:43 AM