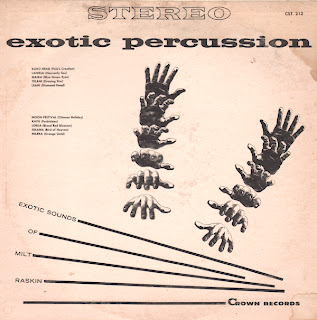 Here we have a very nice exotica album from Milt Raskin. This album is available for purchase/download so I will not be posting a sample.

I don't know why Crown didn't spend a few dollars to produce a halfway decent cover for this album. The project was worth a flashy cover to help boost sales.

The title is a misleading. I would not lump this album in with all the percussion albums that hit the market at about this time. Raskin's work here is more of a blend between Arthur Lyman, a touch of Lex Baxter and Raskin's own instrumental sensibilities.

Raskin is also responsible for another fine "exotica" recording on Crown Titled KAPU (Forbidden). Crown did spend some money on that cover.
Posted by By Mark Betcher at 3:42 PM