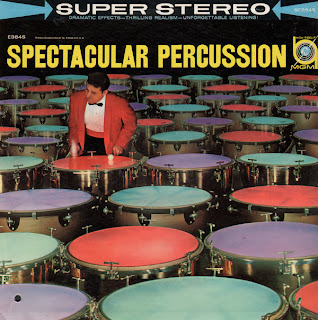 Swinging album that swings between big band, Latin and a touch of "exotica" percussion. Mozian has a good grasp on late 50s/early 60s groove.

Curiously the producer seemed to be worried that Mozian was too far out. This from the back cover: The selection of tunes leans heavily on the rhythmic and exotic but, remarkable enough, almost every one is danceable, particularly South Of The Border and Caripoca.

Mozian wrote the sample, Repercussion.
Posted by By Mark Betcher at 3:33 PM