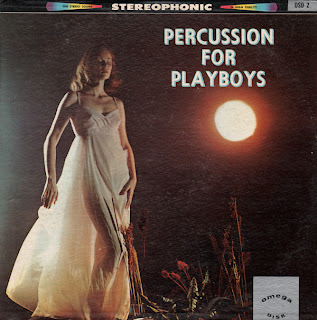 This one looks like it was released in... oh, say 1960/61. The LP is a compilation of whatever Omega had on the shelf at the moment... including several weird tracks that include a sound effects track from an automobile race and the track titled A Visit To A Hindu Monastery (that I tacked onto the sample track above)! There are no artist credits and there is precious little "percussion" on the album. Actually this is more of a "jazz" album. Omega slapped the provocative title and cheesecake photo on the cover and they were good to go.