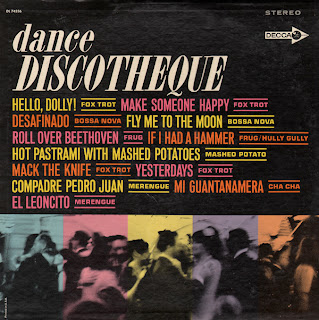 From the May 30, 1964 Billboard: The discotheque is spreading from the society saloons and fashionable private clubs to the home phonograph. The do-it-yourself discotheque is being initialed by Decca Records which is hitting the market with a "Dance Discotheque" album this week.

According to Harry Meyerson Decca artists and repertoire producer who conceived the idea of bringing the current Jet Set vogue to the masses, the LP duplicates the recording program played in the discotheques around the country, especially at Shepheards in Drake Hotel here. In fact, Meyerson had Slim Hyatt, the "disquaire" (disk jockey) at Shepeards assist him in programming the album. At the club, Hyatt spins a variety of records that run the gamut from Louis Armstrong's Hello Dolly to Trini Lopez's "If I Had A Hammer."
Posted by By Mark Betcher at 5:11 PM