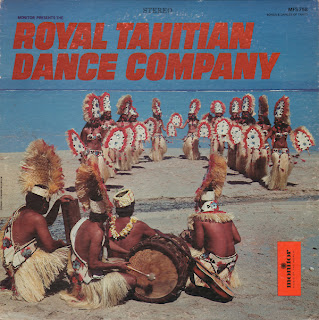 I'm always surprised at what recordings I find online for purchase and those I don't. From the looks of it, this album seemed like it might be obscure, but it isn't. The record is available both, on CD and by the download.

The album is a nice listen. The songs are varied enough to help hold interest and the engineering is excellent.

A little history from the back cover: The Royal Dance Company began as the Tahiti Nui and under that name toured the U.S.A. and Canada. In 1973 the Tahiti Nui was joined by the young Rarotongians of Turepu Turepu from the Cook Islands and the new ensemble was renamed the Royal Tahitian Dance Company.
Posted by By Mark Betcher at 8:55 AM