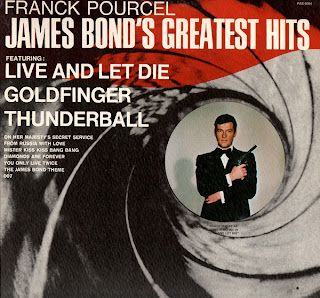 You can find this LP on CD bundled with Mourir D'Aimer.

There is a website dedicated to Pourcel with a section that features many Pourcel album covers and other information. The site suggests that Pourcel is considered "the inventor of lounge and easy listening music".

I've always considered lounge to be music played in a lounge even though the term seems to have been adopted at some point and applied to a certain "sound".

That said, this is a GREAT record! If I was going to label the sound, I would say late 60s light pop or mood spiced with spy movie flavor.

If you like Pourcel you will also love the music of Paul Mauriat.
Posted by By Mark Betcher at 4:09 AM