Holiday In Brazil - Nestor Amaral And His Continentals 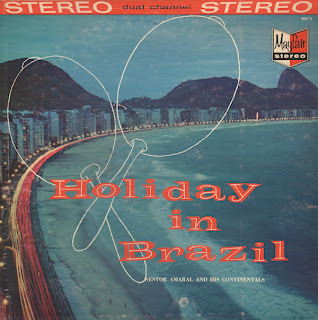 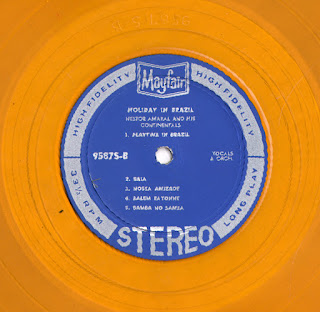 This album was also released with a "Golden Tone" sticker brand or logo printed in place of the Mayfair logo on the cover.

This is a great album, especially for a budget label. The music is smooth, jazzy and it was hard to pick a sample for you. There are also mixed language vocal tracks to be enjoyed. What really stands out on this set is the flute work. No credit is given to group members.

Nestor Amaral seems to be best known for his film score work. Amaral does have an IMDB page.

From the back cover: Ameral's motion picture credits are also impressive. He introduced the hit song, It's Magic, sung by Doris Day in Romance On The High Seas, and for the occasion wrote Spanish lyrics to the tune. Senor Amaral also brought to U.S. audiences the beautiful Ary Barroso melodies, BAIA and Brazil, the first in Walt Disney's Three Caballeros, the latter in The Gang's All There. In the soundtrack area of motion picture production, Amaral is well represented as the guitar virtuoso he assuredly is. He played the guitar background in the pictures, Blood And Sand, Duel In The Sun (for Greg Peck) and For Whom The Bells Tolls. In many recent movies Amaral played background on mandolin and, in the spring of 1957, worked with singer Herb Jeffries in Calypso Joe.