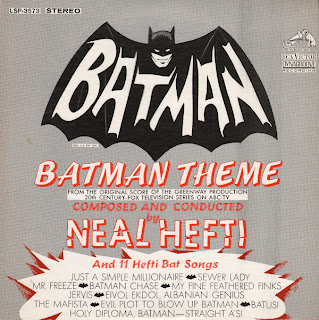 Surely this record has been blogged to death. Of course the album can be found on CD, so I won't be posting a sample. But I had to dust off the cover of the copy I found and display it up here in The Atomic Attic.

What a terrific space age recording! The Batman Theme charted on the Top 40. But there is not a dull track on this LP. A masterwork of cool all the way through and possibly my favorite light pop now sound style album.

Read more about Hefti on his spaceagepop page. 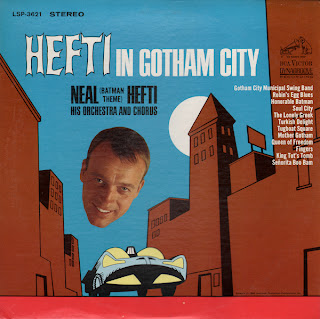 Terrific follow-up album in the same style. There are a few songs that are a bit darker.

Some of the tracks off this album are available on the CD release that includes the album posted above.

Great stuff that you have to find the vinyl to enjoy.
Posted by By Mark Betcher at 11:36 AM