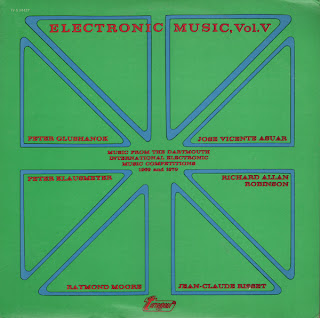 From the back cover (concerning the first track which is posted as a sample above): Completed in early 1969, this piece was begun as an experiment in textures from concrete sources, and was developed as an elegy in memory of my friend Henry Saia who died by suicide just a few months before. Henry's transient and restless quality, seen through the eyes of his friends who discuss him interminably; his depressions lightened by a sense of humor, and his life which ended without hope despite the jokes and the friends, broke traumatically into our unawareness.

The entire album is filled with excellent space/SF/dark and moody stuff with titles that include Cambrian Sea, Trip Through The Milky Way – An Electronic Panorama, Divertimento, Ambience and Mutations.
Posted by By Mark Betcher at 2:03 PM