The Young Ones Of Jazz 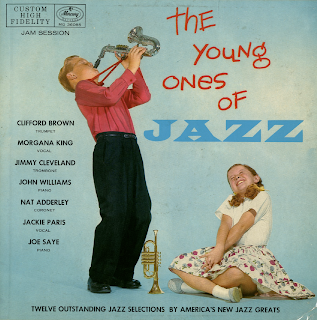 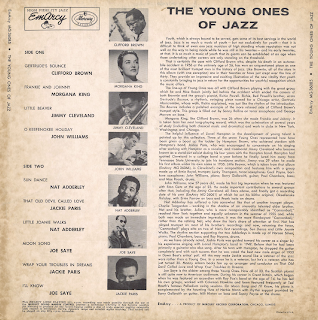 From the back cover: Youth, which is always bound to be served, gets some of its best servings in the world of jazz. Jazz is so much a music of youth – but not exclusively for youth – that it is difficult to think of even one jazz musician of high standing whose reputation was not well on the way to being made while he was still in his twenties – and his early twenties, at that. It is so much a music of youth that its giants can be established at an age when those undertaking other careers are only standing on the threshold.

That is certainly the case with Clifford Brown who, despite his death in an automobile accident in 1956 at the untimely age of 26, has won an unquestioned place as one of the most brilliant trumpet men in the history of jazz. Like Brownie, all of the stars in this album (with one exception) are in their twenties or have just crept over the line of thirty. They provide an impressive and exciting illustration or the new vitality that youth is constantly bringing to jazz in return for the opportunities for youthful recognition which the music offers.

The line-up of Young Ones tees off with Clifford Brown playing with the great group which he and Max Roach jointly led before the accident which ended the careers of both Brownie and the group's pianist, Richie Powell. Richie, Bud Powell's brother, wrote Gertrude's Bounce, a rhythmic, swinging piece named for a Chicago artist, Gertrude Abercrombie, whose walk, Richie explained, was just like the rhythm of the introduction. The Bounce includes a polished example of the more relaxed side of Clifford Brown's trumpet style. This group is filled out by Sonny Rollins on tenor saxophone and George Morrow on bass.

Morgana King, life Clifford Brown, was 26 when she made Frankie and Johnny. It is taken from her next long-playing record, which was the culmination of several years of study (including bath classical music and dramatics) and work in clubs in New York, Washington and Chicago.

The helpful influence of Lionel Hampton in the development of young talent is pointed up by this collection. Three of the seven Young Ones represented here have been given a boost up the ladder by Hampton: Brown, who achieved stardom with Hampton's band, Jackie Paris, who was encouraged to concentrate on his singing after working with Hampton as a vocalist, and trombonist Jimmy Cleveland who became known as a stand-out soloist during his four years with the Hampton band. Hampton had spotted Cleveland in a college band a year before he finally lured him away from Tennessee State University to join his trombone section. Jimmy was 29 when he made his first album under his own name in 1955. Little Beaver, which is taken from that album (EmArcy MG 36066), is Cleveland's own composition and features him with a group made up of Ernie Royal, trumpet; Lucky Thompson, tenor saxophone; Cecil Payne, baritone saxophone; John Williams, piano; Barry Galbraith, guitar; Paul Chambers, bass and Max Roach, drums.

John Williams, now 27 years old, made his first big impression when he was featured with Stan Getz at the age of 23. He made important contributions to several groups after that, including Jimmy Cleveland All Stars above, and finally got a recording date of his own (EmArcy MG 36061) at which he cut his blithe original, Okeefenoke Holiday, with Ernie Farrow on bass and Frank Isola on drums.

Nat Adderley has suffered a fate somewhat like that of another trumpet player, Charlie Teagarden – working in the shadow of an unusually talented older brother. Nat and his brother, Julian, who is more recognizably identified "Cannonball," rather than the retiring Nat, who drew the lion's share of attention at first. Nat has played trumpet on most of his brother's recordings and now, returning the favor, "Cannonball" plays alto on two of Nat's first recordings. Sun Dance and Little Joanie Walks. The rhythm section supporting the two Adderleys is made up of Horace Silver, piano; Paul Chambers, bass and Roy Haynes, drums.

As we have already noted, Jackie Paris was guided toward his career as a singer by his experience singing with Lionel Hampton's band in 1949. Before that he had been primarily a guitarist who also sang. After his term with Hampton, he dropped the guitar completely and with such success that he was voted the best new singer of 1953 in Down Beat's critic poll. All this may make Jackie sound like a veteran, but he's a veteran who has just turned 30. Manny Albam backs him up as arranger and conductor of That Old Devil Called Love and Wrap Your Troubles In Dreams.

Joe Sayer is the oldest among those Young Ones. Now all of 33, the Scottish Pianist is still quite new to American audiences. During his career in Great Britain, which began when he was featured on accordion with Roy Fox's band at the age of 14, he has led his own groups, worked with Coleman Hawkins and been featured frequently at Ted Heath's famous Palladium swing sessions. On Moon Song and I'll Know, his piano is complemented by the haunting flute of Herbie Mann with rhythm support provided by Barry Galbraith on guitar, Milt Hinton on bass and Sonny Payne at the drums.