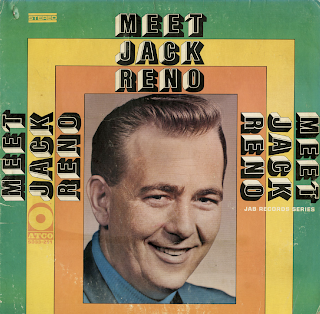 From the back cover: It's 1967. We sit in Buddy Killen's office in Nashville, home of Jab Records, talking music business shop talk. Buddy's desk a picture of organized confusion. Small mountains of unopened mail and demonstration tapes dwarfed by larger mountains of similar stuff, already opened.

"Hey, man, I want you to hear something."

Buddy, co-owner and producer of Jab Records, aims his hand in the direction of a medium sized mountain and plucks out a box of tape and it is quickly spinning on the deck at 7 1/2. Twin speakers on the wall pour out a liquid voice. "Repeat after me... darling I love you." Warm. Rich. "...I really need you." A strong, sure delivery, no gimmicks necessary, Buddy and I sit there digging the sound as it flows from the wall speakers. I like it. My introduction to Jack Reno.

It's later. Two months later. Jack Reno's record comes to me in the mail for review in Cash Box magazine. Radio stations across the country get copies at the same time. Deejays who know Jack as a fellow member of the radio society (he's a key jockey at WXCL in Peoria, Ill.) are introduced to Jack Reno the singer.

Still later. This time only a few days. Stations begin playing the record. Over and over. The warm voice spins on hundreds of studio turntables. Travels over thousands of miles of airwaves. Beams out of scores upon scores of radio speaker. Millions of listeners meet Jack Reno.

Now it's 1968. May. "Repeat after me" has become a smash success and Jack Reno is suddenly known from border to border. Fan clubs spring up. His second record has just been released and now there's no long waiting period. Stations are playing it heavily. Fans are out in the stores to get their copies. "How Sweet It is... to be in love with you." Same warm voice. Same sureness of delivery. And now it's time for an album. It has to be a strong album. Like Jack's voice. It has to have good songs all the way. – Tom McEntee - Country Editor, Cash Box Magazine

From Billboard - July 13, 1968: Jack Reno's current Jab Records Series hit single "How Sweet It Is (To Be In Love With You)" and his former hit "Repeat After Me" should help spark this, his debut album, to sales success since both are included here. But, the other 10 cuts are appealing as Reno sings Ferlin Husky's "Just For You," Henson Cargill's "Skip A Rope," and the standard "A Fallen Star" in fine style.

Just For You
Skip A Rope
A Fallen Star
Before The Bird Flies
Repeat After Me
You're Gonna Have To Come And Get It
How Sweet It Is (To Be In Love With You)
Music Is (The Language Of Love)
The Memory
Jukebox
Birds Can't Fly That High
The Market Place
Posted by By Mark Betcher at 10:42 PM