The Shape Of Sounds To Come - Larry Elgart 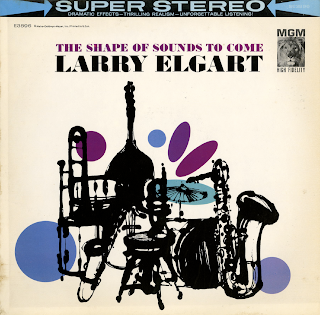 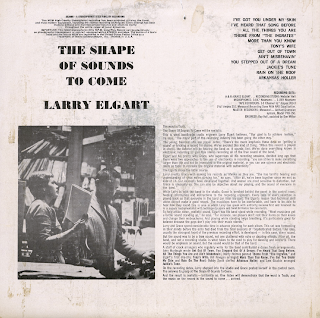 From the back cover: The word is Truth.

The Shape Of Sounds To Come will be realistic.

This is what bandleader / audio engineer Larry Elgart believes. "Our goal is to achieve realism." he says, "The major part of the recording industry has been going the other way."

The young, bearded alto sax player notes, "There's too much emphasis these days on 'getting a sound' or tricking a record for stereos. We've avoided this kind of thing. "When this record is played in stereo, the listener will be hearing the band as it sounds live. We've done everything known in electronic recording to give this stereo recording all of the true sound of the band."

Elgart and his pretty wife Grace, who supervises all his recording sessions, decided long ago that there were two approaches to the use of electronics in recording: "you can strive to make something larger than life and not be interested in the original material, or you can use science and electronic skills as tools to recreate the original material with authenticity."

The Elgarts chose the latter course.

Larry credits Grace with making his records as lifelike as they are. "She has terrific hearing and understanding of what we're striving for," he says. "After all, we've been together since we met as kids at 14. Our concepts have developed together. And women are most sensitive to distortion, but Grace is unusually so. She can also be objective about my playing, and the sound of everyone in the band.

While Larry is with the band in the studio, Grace is perched behind the panel in the control room, feeding information and instructions to the recording engineers. Every take of every selection is played back so that everyone in the band can hear his part. The Elgarts reason that technical skill alone cannot make a good record. The musicians have to be comfortable, and have to be able to hear how they sound. This is area in which Larry can speak with authority, because first and foremost he is a superb instrumentalist with technique to spare and tonal brilliance few can match.

To help attain clean, realistic sound, Elgart has his band stand while recording. "Most musicians get a better sound standing up." he says. "For instance, sax players don't rest their horns on their knees and change their embouchures. And playing while standing helps breathing. It's particularly good for balance because the guys don't play into their music stands."

Larry and Grace spend considerable time in advance planning for each album. This set was fermenting in their minds before the echo had died from the final sessions of "Sophisticated Sixties." An idea, usually the strongest facet of the previous recording effort, is developed – in this case, sheer sound.

But the sound was to be a true sound, not one cluttered with echo or dazzling effects. After all, the band, and not a recording studio, is what takes to the road to play for dancing and concerts. There would be emphasis on sound, but the sound would be that of the band.

A staff of crack arrangers who regularly write for the band contributed a dozen fresh arrangements. John Murtaugh wrote "Get Out Of Town," "You Stepped Out A Dream," "I've Heard That Song Before," "All The Things You Are and Ain't Misbehavin';" Marty Homes penned "Theme From the "The Ingrates;" and Elgart's first Cha-Cha, Tony's Wife; Bill Finegan arranged "More Than You Know," "I've Got You Under My Skin" and "Rain On The Roof:" Bobby Scott cleaved "Arkansas Holler": and Lew Gluckin arranged "Jackie's Tune."

From Billboard - April 17, 1961: The Larry Elgart band comes through with fresh, sparkling performances here of a group of standards that should interest the ork's many followers. The arrangements are modern and stylish, and the dancing beat comes through on every tune. Songs include "I've Got You Under My Skin," "Get Out Of Town," "Tony's Wife" and "All The Things You Are."

I've Got You Under My Skin
I've Heard That Song Before
All The Things You Are
Theme From "The Ingrates"
More Than You Know
Tony's Wife
Get Out Of Town
Ain't Misbehavin'
You Stepped Out Of A Dream
Jackie's Tune
Rain On The Roof
Arkansas Holler
Posted by By Mark Betcher at 8:27 PM