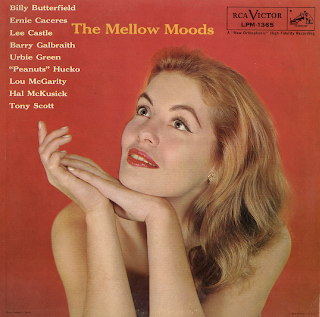 From the back cover: The framework for this special type of mellowness have been provided by three unusually gifted arrangers: Ralph Burns (Why Shouldn't I; Pastel Blue, Moments Like This; Everything's Been Done Before), who wrote the memorably mellow Early Autumn for Woody Herman and lately has had great success in writing unhackneyed settings singers; George Siravo (What Do You Want To Make Those Eye At Me For?; Easy Now; Let's Take The Long Way Home), a quondam jazzman who has found this knowledge useful in giving singers – Frank Sinatra, for one – the kind of stimulating accompaniment which brings out all their potential; and Bill Stegmeyer (Robins And Roses; I'll Be A Friend With Pleasure; Keeping' Out Of Mischief Now; Morning Glory), a top jazz clarinetist who has written for numerous big bands since 1942, including that of his Transylvania College roommate Billy Butterfield.

Robins And Roses, one of Bing Crosby's early singing stints for the films, is decorated by the very Goodmanesque clarinet of "Peanuts" Hucko (it has been said of Hucko that he plays more like Benny Goodman today than Goodman himself does). Clarineting of a very different order – the lithe, feather-toned manner of Tony Scott – is the feature of another, later Crosby film tune, Let's Take The Long Way Home. Hucko also trots out his tenor saxophone to give a new sound to What's New, which was originally a trumpet showpiece called I'm Free when Billy Butterfield used to play it with Bob Crosby's band.

The same Butterfield, mellifluous as ever, teams up with the trombonist Urbie Green for an unusual duet of Cole Porter's Why Shouldn't I and has the solo spotlight to himself on two numbers – I'll Be A Friend With Pleasure, a tune that was granted immortality by Bix Beiderbecke's recording of it with Paul Whiteman's orchestra, and on of the more haunting of the old standards, Everything's Been Done Before.

Green, a trombonist of awesome versatility who is a graduate of several big bands, including Woody Herman's is the duet specialist in this set. In addition to his bit vis-a-vis Butterfield, he joins fellow trombonist Lou McGarity in a lovely version of Artie Shaw's Pastel Blue which is in the finest tradition of relaxed jazz playing. McGarity huffs along on "Fats" Waller's bouncing Keeping' Out Of Mischief Now.

Ernie Caceres, who has stopped briefly with most of the better big bands of the past twenty years (Glenn Miller, Goodman, T Dorsey and Herman head his list), is featured on What Do You Want To Make Those Eyes At Me For?, a number remembered for Berry Hutton's lusty rendition of it. Caceres changes the tenor of the tune but – clever fellow – he does it with a baritone saxophone. The lightly modern alto sax of Hal McKusick glides through Frank Loesser's Moments Like This, an old Maxine Sullivan specialty, while Lee Castle, the sure-lipped trumpeter who has also been known as Lee Castaldo during his tenures with Artie Shaw, Tommy Dorsey, Glenn Miller and others, recreates Duke Ellington's brilliant Morning Glory. The only new tune in the set, a worthy companion to the other well-seasoned selections, is Easy Now, embellished principally by Barry Galbraith's polished guitar work.

– John S. Wilson
From Billboard - February 23, 1957: A "Save on Records" selection in December, this is a solid commercial entry. While this is a "background" or "mood" type LP, it is in a jazz context and anything but musically innocuous. Three arrangers – Ralph Burns, George Siravo and Bill Stegmeyer – were given a big band for a session apiece and each produced some highly attractive settings for some lovely but neglected popular songs of the past. "Pastel Blue," which features he trombones of Urbie Green and Lou McGarity, would be a good demo band. The music is varied, but it is relaxed, melodic, danceable stuff that will have wide general appeal.