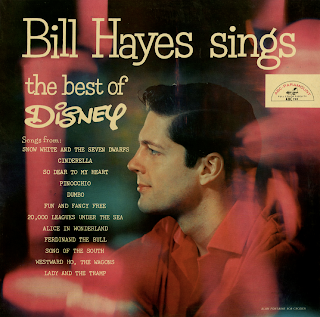 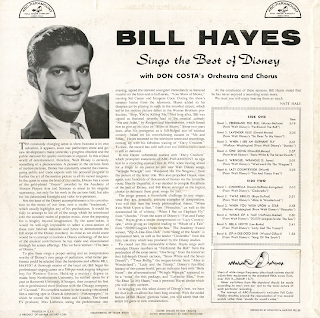 From the back cover: To give these songs a proper setting and an interpretation worthy of Disney's own gauge of perfection, what better performer could be selected than the handsome and affable Bill Hayes? A thorough master of the vocal art, Bill began his professional career as a $10-per-week singing telegram boy for Western Union. Holding a master's degree in music from Northwestern University, he studied opera for a year at Roosevelt University (Chicago), then accepted his first role in professional show business with the Chicago company of "Carousel." His complete success in the exacting role earned him a starring spit in Olsen & Johnson's "Funzapoppin'," in which he toured the United States and Canada. The famed TV producer, Max Liebman, seeing the performance one evening, signed the talented youngster immediately as featured vocalist on the hour-and-a-half series, "Your Show Of Shows," starring Sid Caesar and Imogene Coca. During the show's summer hiatus from the tele waves, Hayes added to his thespian art by playing in stock in the strawhat circuit, which led to his motion picture debut in the Warner Brother's production, "Stop, You're Killing Me." Not long after, Bill was signed as featured juvenile lead in the musical comedy "Me And Juliet," by Robert and Hammerstein, which forced him to give up his stint on "Show Of Shows." Some two years later, after his emergence as a full-fledged star of musical comedy – based on his overwhelming success in "Me And Juliet," Hayes returned to the television scene and recordings, coming up with his fabulous waxing of "Davy Crockett." To date, the record has sold well over two million copies, and is still in demand.

It was Hayes' substantial success with "Davy Crockett" which prompted executives of ABC-PARAMOUNT to sign him to a recording contract late in 1956, when casting about for a singer to do justice to two new Walt Disney songs, "Wringle Wrangle" and "Westward Ho The Wagons," from the picture of the latter title. This also propelled Hayes, once again, into hundreds of thousands of homes via the turntable route. Shortly thereafter, it was decided to compile the album of the best Disney, and Bill Hayes emerged as the logical choice to delineate these great songs for you.

Ferdinand The Bull
Lavender Blue
When I See An Elephant Fly
One Song
Wringle, Wrangle
Lazy Countryside
Cinderella
'Twas Brilling
When You Wish Upon A Star
Whale Of A Tale
Bella Notte
Zip-A-Dee-Doo-Dah
Posted by By Mark Betcher at 9:57 PM