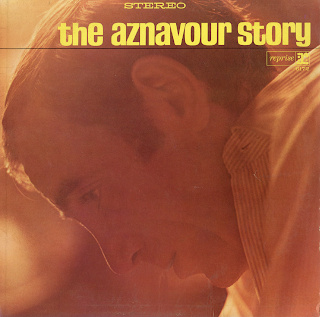 From the back cover: When he gave his first concert at Carnegie Hall, 150 fans flew over from Paris to be on hand. Three thousand people applauded, before, during, and after almost every song. He sings in French. But even to the non-French-speaking listener, his charm comes through.

He's skinny as a microphone. Short as a barstool, mournful as Edith Piaf. He's forty years old, and he is also France's most popular singer.

From Billboard - September 4, 1965: Charles Aznavour has the same style Gallic "soul" that made Edith Piaf a legend in her lifetime. He sings the weepers and the up-tempo material with the same verve. Paul Mauriat and his orchestra do a fine job backing. English translations dealing with the theme of each selection are helpful.