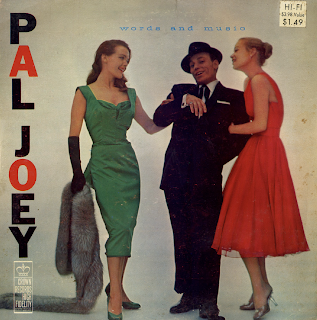 From the back cover: Here is an album from the overture to the finale the page is up almost all the way. As arranged and conducted by Maxwell Davis the sound is the big sound that you'd expect from a clever Broadway musical. The backing to the vocals is exact and seems more like an emotional alliance than a mere recording session for in fact that is what it was.

You'll undoubtedly be struck by the voice, style and phrasing of young and talented Duke Hazlett. Currently working at the LA Ronde, a smart supper club on Ventura Boulevard in the San Fernando Valley. His ease and charm of delivery that are so evident on the floor have been recaptured right here in this album. Standing thin and somehow wistful looking – hat titled back – and using a hand mike – Duke stands before the band.

The intro starts and the rhythm begins. He sings and the magic is there. Conversations cease and only the soft whir of a cocktail mixer is heard through the music. Duke's charm and complete ease are fascinating to see and hear. He's swinging' with the music now and his left hand softly snaps with the beat.

Suddenly he's saying 'goodnight' and you realize that 30 to 40 minuets have gone by. The conversations start again – but the memory of this charming spell-weaver with the richly sensuous sounds and style still lingers. And so it does indeed.

The charming and lovely Adele Francis singing the songs of Rita Hayworth brings charm and wit to her share of the album, especially you'll notice this on her understanding and piquant version of the strippers 'inner-though' while she's performing... the saucy "Zip".

The noice heard on this sample is due mostly to pressing imperfections.

Overture
There's A Small Hotel
I Could Write A Book
Zip
Bewitched
The Lady Is A Tramp
I Didn't Know What Time It Was
Bewitched
My Funny Valentine
Finale
Posted by By Mark Betcher at 7:57 PM