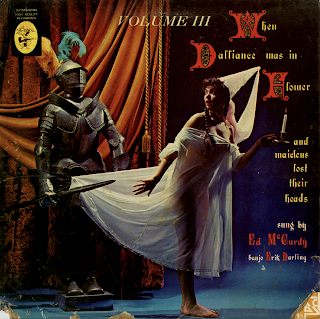 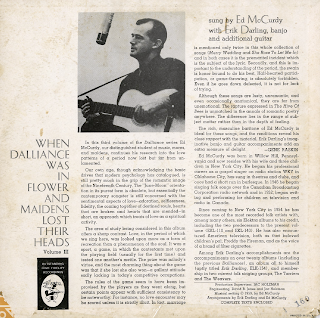 
From the back cover: Ed McCurdy was born in Willow Hill, Pennsylvania and now resides with his wife and three children in New York City. He began his professional career as a gospel singers on radio station WKY in Oklahoma City, has sung in theaters and clubs, and once had a short run in burlesque. In 1946 he began singing folk songs over the Canadian Broadcasting Corporation radio network and in 1952, began writing and performing for children on television and radio in Canada.

Since coming to New York City in 1954 he has become one of the most recorded folk artists with, among many others, six Elektra albums to his credit, including the two predecessors to the present volume (EKL-110 and EKL-140). He has also encountered American television, both as that beloved children's pal, Freddy the Fireman, and as the voice of a brand of filter cigarettes.
Among Erik Darling's accomplishments are the accompaniments on over twenty albums (including the previous Dalliances), an album all to himself (aptly titled Erik Darling, ELK-154), and membership in two current folk singing groups, The Tarriers and The Weavers.

From Billboard - May 18, 1959: This should meet a ready market among those who own its two predecessor versions, both of which enjoyed high success. McCurdy is in fine form as usual and fanciers will find these tales to banjo and guitar accompaniment just as tangy and tart as those which went before. A bold and brazen cover will catch looks.

The Yeoman Of Kent
The Shepherd
Old Brass To Mend
Celia
As I Walked In The Woods
The Merry Wedding
Whilst Alexis Lay Prest
How Happy's The Miller
The Hive Of Bees
The Sound Country Lass
She Rose To Let Me In
The Country Wake
Pillycock
When Flora Had On Her New Gown
The Spinning Wheel
The End
Posted by By Mark Betcher at 8:40 PM