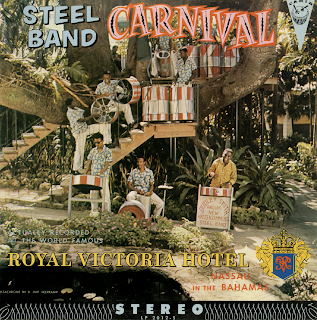 From the back cover: The "Steel Band Carnival at the Royal Vic" is the second album of Dudley Smith's World Championship Steel Band to be recorded under Carib's label. Since the release of their first album, Dudley and his band have gone on to success after success in the field of entertainment in the Bahamas. They have become unquestionably the greatest single attraction in the islands and are now entering their fourth year of playing at top hotels and clubs. Their's is a well deserved triumph for it is backed by hard work and the intelligent application of talent in the refinement of the tonal quality of the steel drum instruments, in the arrangements and adaptation of them to all kinds of music and in the writing of original music.

This is their first stereo album and those of you who enjoyed their first release will delight in the stereo effects achieved in this recording. The original eight members of Dudley's band are present again and we think you will agree that they have accomplished such all time favorites as, Margie, Colonel Bogie and Tea For Two Cha Cha.

You will detect sounds of excitement and merriment in the background. That is no accident but part of the atmosphere that results from Carib's policy of recording on the scene during an actual performance in order to capture all the spontaneity and natural tone. In this case Carib was rewarded handsomely. The "studio-in-the-field" Victoria Hotel with a really "live" audience of hotel guests and tourists was established between the performers and the audience. Feeling the warmth and encouragement surrounding them. Dudley and his men really extended themselves. The excitement grew until some of the listeners could no longer contain themselves and became vocal in their enjoyment.

The picture of Dudley and his band appearing on the cover was taken on the steps of the famous Tree House of the Royal Victoria Hotel where tea has been served traditionally since colonial times.