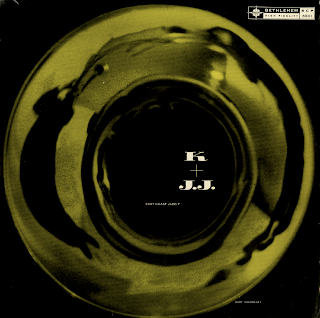 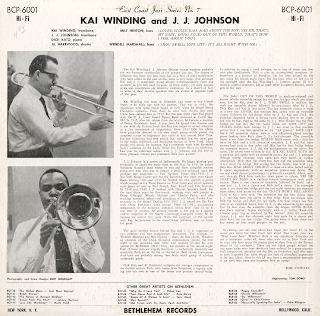 Kia Winding was born in Denmark and came to the United States at an early age with his parents. That was in 1934. His experience with name bands began in 1941 when he joined Sonny Dunham's orchestra. From there he went with Alvino Rey until Uncle Sam claimed him in 1942. For the next three years Kai played with the U. S. Coast Guard Dance Band stationed at Curtis Bay, Md. In 1945, after his release from the service, he became a member of Benny Goodman's band. A year later he joined Stan Kenton and it was with the Kenton band that Kai first began to attract attention as a jazz trombonist of importance. From 1947 -1950 his efforts were primarily devoted to his own small group which played the complete circuit of important jazz clubs in and around New York. For the following four-year period Kai worked for the most part in the radios, television and recording studios in New York. Many people will recall, for instance, Kai's trombone wok with Raymond Scott's orchestra on the Lucky Strike Hit Parade Show on television. Last year he combined talents with J. J. Johnson and two of them planned, created and presented their own quintet.

J. J. Johnson is a native of Indianapolis. He began playing professionally at about the same time as did Kai. In 1941 he joined Snookum Russell's band where he met and blew alongside another rising star who also was to impact a profound influence upon the youngster jazz musician – Fats Navarro. From 1942-1944 J. J. was with Benny Carter and for the following two years with Count Basie. During 1946 and 1947 he fronted his own quintet, a group which worked at the Three Deuces on 52nd Street and which featured such giants of jazz as Bud Powell, Max Roach and Fats Navarro. In 1948 and 1949 J. J. worked with Illinois Jacquet's Band. For the next three years he freelanced, working with such people as Dizzy Gillespie, Woody Herman and Charlie Parker and also teaching harmony, theory and arranging at the Music Center Conservatory in the Bronx. During 1951-1952 J.J. toured the Far East with Oscar Pettiford's USO troupe. Then in 1952, succumbing temporarily to the economic demands which beset most of us at one time or another, he secured himself a day gig as a quality control inspector at the Sperry Gryoscope Company where he remained for almost two years. With the inception of the quintet with Kai, he returned to the music scene full-time, and, we hope for good.

The solid rhythm section behind Kai and J. J. is composed of two veterans and two comparative newcomers. The veterans – Wendell Marshall and Milt Hinson – share the bass chores. Wendell an alumnus of the Duke Ellington organization, played the first night of the recording date. Milt, who recently fronted his own quartet for Bethlehem (BCP-1020), was present on the second night. Both of these mean are superb musicians – technically, musically and creatively. Both are at the top of the list on their chosen instrument. And both are probably among the fairly small group of all-time underrated greats.

Dick Katz and Al Harewood comprise the younger complement in the rhythm section. Dick, who comes from Baltimore, is rapidly coming into his own as one of the better jazz pianists around today. In addition to being a hard swinger, he is one of those rare few who play intelligently. Dick is also an accomplished composer. Al Harewood is a product of Brooklyn. He as been around on the jazz scene for almost eight years, but has been more or less out of the spotlight until the Kai Winding-J.J. Johnson group. Al is a driving, tasteful drummer, but as some other drummers around, never gets int he way. – Tom Stewart

From Billboard - April 23, 1955 - (Bethlehem BCP-13): Some of the most exciting music heard on the East Coast this past season has been that provided by the quintet formed by the two leading jazz trombonists. Kai Winding and J. J. Johnson. Fine as both of these men are as individual, together they stimulate each other to heights that set new standards for both. No small amount of the credit for this swinging session is due bassists Wendell Marshall and Milt Hinton and pianist Dick Katz.


Out Of This World
Thou Swell
Lover
Lope City
Stolen Bass
It's All Right With Me
Mad About The Boy
Yes Sir, That's My Baby
That's How I Feel About You
Gong Rock
Posted by By Mark Betcher at 6:46 PM