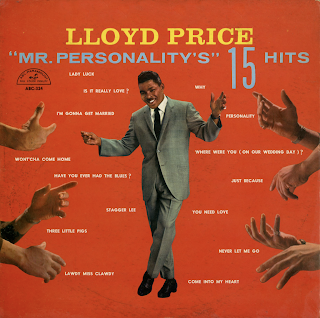 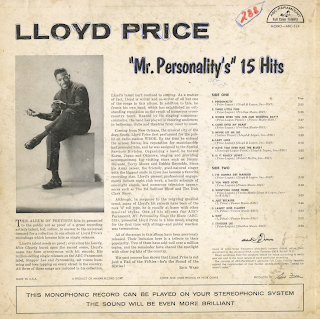 Tracks available from online vendors so I will not be posting a sample. Presented her to share the cover art and jacket notes excerpt.

From the back cover: Coming from New Orleans, the musical city of the deep South, Lloyd Price first performed for the public on radio-station WBOK. By the time he entered the armed forces, his reputation for musicianship had preceded him, and he was assigned to the Special Services Division. Organizing a band, he toured Korea, Japan and Okinawa, singing and providing accompaniment for visiting stars such as Jimmy Durante, Terry Moore and Debbie Reynolds. Since his Army career, the friendly, good-natured singer with the biggest smile in town has become a favorite recording star. Lloyd's present professional engagements include night club work, a hectic schedule of one-night stands, and numerous television appearance such as The Ed Sullivan Show and The Dick Clark Show. – Rick Ward

From Billboard - June 20, 1960: ABC-Paramount recording artist, is performing selections from his album, Mr. Personality's 15 Hits, during his current one-night tour of the East. He opens at the Beachcomber Club, Wildwood, N. J., July 15, for one week. Lloyd's new single is Question b-w If I Look A Little Blue – a double side Billboard Pick.

Personality
Three Little Pigs
Where Were You (On Our Wedding Day)?
Come Into My Heart
Never Let Me Go
Have You Ever Had The Blues?
Is It Really Love?
I'm Gonna Get Married
You Need Love
Wont'Cha Come Home
Just Because
Lady Miss Clawdy
Why
Stagger Lee
Posted by By Mark Betcher at 5:17 PM