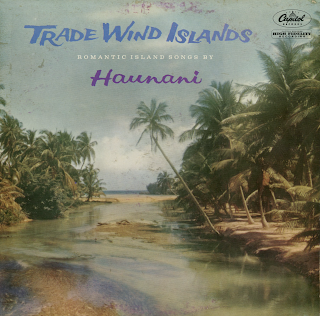 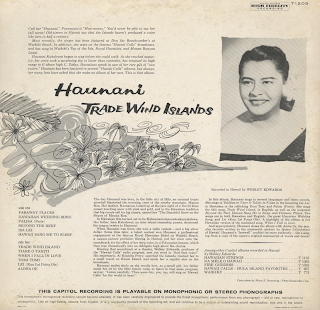 From the back cover: Call her "Haunani" Pronounced it "How-nonny." You'd never be able to say her full name! Old-timers in Hawaii say that the Islands haven't produced a voice like hers in half a century.

Most recently, the singer has been featured at Don the Beachcomber's at Waikiki Beach. In addition, she stars on the famous "Hawaii Calls" broadcasts, and has sung at Waikiki's Top of the Isle, Royal Hawaiian, and Moana Banyan Lanai.

Haunani Kahalewai began to sing before she could walk. As she reached maturity, her voice took a surprising dip to lower than contralto, but returned its high range to G above high C. Today, Hawaiians speak in awe of her rare gift of "two voices." Haunani has been featured in several "Hawaii Calls" albums, but always, her many fans have asked that she make an album of her own. This is that album.

The day Haunani was born, in the little city of Hilo, an unusual tropic snowfall blanketed the towering crest of the nearby mountain, Mauna Kea. Her mother, Keonaona, looked up at the rare sight of a Torrid Zone sunset touching the snow with pink and gold, and in the Hawaiian tradition that big events call for big names, named her "The Beautiful Snow on the Slopes of Mauna Kea."

In Hawaiian this turned out to be Kahaunaniomaunakeajauiokalewa. Her father, Sam Kahalewai, an inter-island steamship purser, shortened the tongue twister to Hanuani.

When Hunan was three, she won a radio contest – and a big silver dollar. Some time later, a talent contest won Haunani a professional engagement at the famous Royal Hawaiian Hotel on Waikiki Beach. A motion-picture producer, filming in Hawaii, put her voice onto the soundtrack, for the effect of her deep voice, in a Polynesian lament, which then rose dramatically into an obbligato high above the chorus.

Hearing that soundtrack at a theater, Webley Edwards, producer of the "Hawaii Calls" radio program, sent out word to "find that voice!" His impresario, Al Kealoha Perry, searched the Islands, tracked her to a small resort on Kauai Island, and made her a regular star on the broadcasts.

Haunani smiles shyly as she recalls how, as a small girl, her father made her sit by the little family radio to listen to the same program, saying: "Listen carefully. Then some day, you too, will sing on 'Hawaii Calls' for the world to hear!"

From Billboard - June 15, 1959: Recorded in the Islands by the well-known Waikiki figure, Webley (Hawaii Calls) Edwards, this features the voice of Haunani, a lady with a distinctly soft Hawaiian quality but with an unusually broad range. Songs include "Far Away Places," "Hawaiian Wedding Song," "Beyond The Reef," etc. They all have the pretty, dreamy backings typical of this music of the Islands. Recording sports a fine sound and some of the items would lend themselves to relaxed jock segs.