The Batman Theme - The Marketts 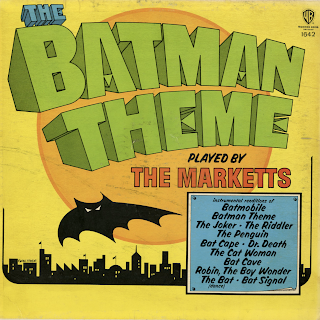 As of last week, 20 labels had released singles based on ABC-TV's "Batman" series and one label was rushing out an album. This could be a potent of things to come in the record industry, TV series about other comic book heroes are in the wind.

CBS has purchased the TV series rights for "The Shadow" and "The Phantom." "The Green Hornet" has been mentioned. There's a new "Superman" being readied.

So far, "Batman Theme" by the Marketts on Warner Bros. Records is the only one on the Hot 100 Chart – at No. 85 with a star. Bubbling under this week are "Batman" by Jan & Dean on Liberty Records and "Batman Theme" by Neal Hefti, RCA Victor Records.

Different tunes have been also recorded by (Jumpin) Gene Simmons, Hi; the Campers, Cameo-Parkway; Billy LaMont, Atlantic; the Plunderers, Roulette; Scotty McKay, Claridge; and the Robins, Ardent; the Spotlights, Smash. Ambassador and Golden are reported to have a kiddie version out. Panorama Records has a record out featuring Rocky & the Riddlers.

Roulette Records is rushing out an LP of Batman music. Mainstream has an LP devoted to comic heroes. Besides the singles already out, one indie producer said six different people had approached him with tapes of Batman songs.

WABC, the Hot 100 radio station here, was playing 12 records – one each hour – last week and rotating them. Then it was learned that many of the versions hadn't been authorized by the Licensing Corporation of America, which had exclusive right from the owners of the Batman copyright. Jay Emmett, chairman of the board of LCA, was extremely busy last week signing licensing agreements with those labels who'd rushed out records without first clearing. So, WABC sharply reduced the number of Batman records it was playing. WABC in the American Broadcasting outlet in New York and thereby has close ties with the TV series.

WMCA here chose one disk – the version by the Marketts – and was spinning it.