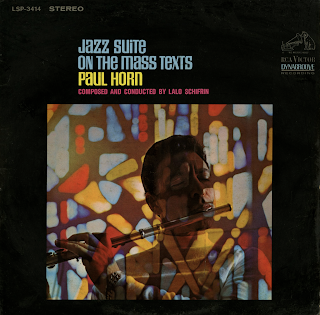 Available from online vendors so I will not be posting a sample. Presented here to share the cover art and Billboard article.

The Soul Of Religion

This is the year that a starling, abject development occurred; Jazz and the Mass met in uncompromising terms. With bridled trepidation, RCA Victor released an album created by jazz musicians Paul Horn and Lalo Schifirn titled "Jazz Suite on the Mass Texts." The project was the first combining jazz techniques with centuries old Mass form.

Several weeks after the album's release, Horn sat in the quiet of his Horseshoe Canyon Drive home in the hills of Los Angeles and reflected that the LP had not caused as much controversy as he had anticipated.

However, he admitted, when he appeared on a radio show to discuss the project, he was barraged with calls from irate listeners. A good many were shocked at the union of jazz with the liturgy, Paul related. "One man, a Baptist minister, called jazz the music of the devil. The album shocked these people's basic concepts. The fact that jazz was associated with religious music was offensive to them, primarily because of their poor association with jazz. Perhaps the album can broaden their thoughts. Jazz certainly has become more sophisticated over the past 20 years."

An interesting sidelight about the project is that Horn and Schifrin, an Argentinian, are both Jewish. Of their eight selections, three are instrumental. Half the music is written; half is improvised. A large vocal chorus sings sections of the new English text, which was cleared by Rome authorities in October. The chorus sings Gregorian chant style since Horn and Schifrin sought to retain a historic flavor in the music.

The creators were originally going to call the music Jazz Mass, but this idea was overruled. The album was given to Catholic Church officials in New York for scrutinization and suggestion. A monsignor in charge of music vetoed the Jazz Mass name, stating it was a jazz suite on the Mass; which proved a more workable title.

In Horn's opinion of the package's eight tracks, the "Credo" is the most compelling and controversial. It is unique because of the frenetic building of the voices until they explode with uncomfortable starkness. Horn explained this movement is representing "should in anguish." "Over the years a feeling of reverence has been associated with religious music," he said. "But who is to say that people can't cry out in anguish and still love God? The holy rollers have been doing this for years.

"Our vision is that this interpretation of religious music is more meaningful. This section moves people. It has a strong emotional content simply because this is the way we imagine the situation."

Composer Schifrin took three weeks to write the eight pieces. When it came time to record the music, the musicians decided to create a reverent feeling in the studio. Lights were eliminated except on the music stands and this darkness affected the 26 persons working on the project. "They realized the seriousness of the project and the challenge." Horn recalled.

The first public airing for the Mass took place Sunday, Nov. 14, at the University of Southern California Methodist Church. Students were used in the chorus and in the brass section along with Horn's group. In analyzing the current interest in liturgical music by Horn, Vince Guaraldi, Fred Katz, Lou Williams and Duke Ellington, Horn says it's a natural development for jazz which is breaking out of its regimented environments.