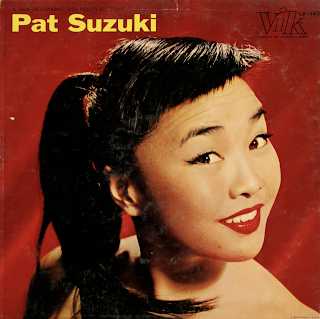 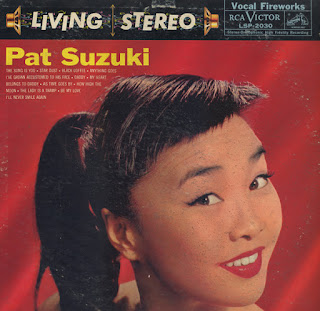 From the back cover (LX-1147): It was only six months ago, in this same space on her first album, that Bing Crosby delivered the first major address to the world about Pat Suzuki. Since then, the Crosby endorsement and the Suzuki product have made The Many Sides Of Pat Suzuki (LX-1127) a best-seller on record shelves everywhere.

Bing, for all his implied excitement over his Seattle discovery, left the lengthy exposition of the Suzuki voice to the disc inside the album where it best describes itself. His typically understated approach further coincided with the wishes of Pat Suzuki's old-shoe modesty. Being something of an old shoe himself, and without intentions of dictating any formal rules of procedure, Bing nevertheless established an editorial policy of restraint and punctuality for this and all future Pat Suzuki albums.

Basic facts of Pat Suzuki's twenty-four years include Methodist choir singing in her native California and professional development in Seattle. Now in her first departure from the West Coast since her beginning in 1955, she's moving with her natural drive and grave toward the very core of show business whose grass roots are embedded deep in the cement of Broadway. This year will be memorable for Pat Suzuki's debut in a Rodgers and Hammerstein musical, under the direction of Gene Kelly, in which she will dance as well as sing.

Barely more than two years after Pat Suzuki made her professional night club debut at Seattle's fashionable Colony, she was named this year's winner of the annual Downbeat poll of disc jockeys as America's Best New Female Singer."

On the express track to the extraordinary national recognition that is now hers, Pat Suzuki has inevitably been likened to other singers, and the list is remarkable. A Variety reviewer saw traces of Jerri Southern, Billie Holiday, Judy Garland, Eartha Kitt and Sarah Vaughan; another critic found Mabel Mercer, Patti Page and Ethel Merman; and most recently a Billboard writer likened her to Rosemary Clooney in her slow moods and to Teresa Brewer and her faster tempos. Lean Horne, Gogi Grant, Eydie Gorme and Sophie Tucker are other names that have been posted in print as Pat Suzuki sing-alines. When confronted with the point-blank question, "How would you describe your singing?", Pat's pat answer is, "Sort of a cross between Shirley Temple and Lawrence Tibet" – and she probably knows best. Now having been boosted to star status by the star statisticians in the night life, television and recording fields, Miss Suzuki, no longer likened to other singers, has been granted her individuality.

Henri Rene, to whom Pat gives the major credit for the success of her first album, is here again her partner in rhythm and rhyme. – Norm Borrow (Pat Suzuki's Manager).

The Song Is You
Star Dust
Black Coffee
Anything Goes
I've Grown Accustomed To You
Daddy
My Heart Belongs To Daddy
As Time Goes By
How High The Moon
The Lady Is A Tramp
Be My Love
I'll Never Smile Again
Posted by By Mark Betcher at 5:34 PM