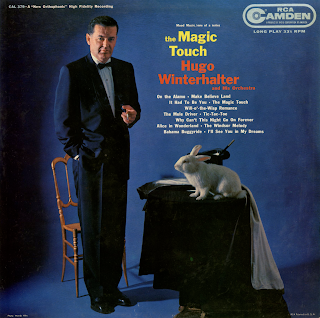 From the back cover: To acquire this "magic touch" with the arranger's pen, Winterhalter served a long Swing Era apprenticeship.

He was born in Wilkes-Barre, Pennsylvania, on August 15, 1090. He studied violin and reed instruments at St. Mary's High School there.

Later he became a member of the string section of the orchestra at Mount St. Mary's College in Emmitsburg, Maryland. He soon became leader of the campus orchestra there, and even supported himself for a while by giving music lessons.

When things were slack, he worked as a railroad laborer, a store clerk, and even as a high school teacher.

His professional career began at the age of sixteen. In 1925, he became a dance band sideman at the salary rate of six dollars a performance.

"Although in college the violin was my major interest," he says, looking back, "in the band I played with later I always played reeds."

For a period of twelve years, Hugo was a sideman in many dance bands, among them the name crews headed by Larry Clinton, Raymond Scott and Jack Jenney.

It was while he was arranging for Tommy Dorsey's band in the mid-'40s that he began to make his mark. Many of his scores which were played by Dorsey still sound rich and undated today, some fifteen years later.

"I had been working for twelve years before I got an opportunity to write for strings with Tommy Dorsey." Hugo recalls. "I liked it better than anything I'd ever done before."

After serving as musical director for two other major recordings companies, Winterhalter came to RCA Victor, where he could give his musical imagination free rein. Shortly after taking over as pop musical director at Victor, he said, "The records I'm making now give me the first chance I've had to arrange things the way I want to hear them." – Dom Cerulli, Down Beat

On The Alamo
Make Believe Land
It Had To Be You
The Magic Touch
Will-O'-The Wisp Romance
The Mule Driver
Why Can't This Night Go On Forever
Tic Tac Toe
Alice In Wonderland
The Windsor Melody
Bahama Buggyride
I'll See You In My Dreams
Posted by By Mark Betcher at 9:42 AM