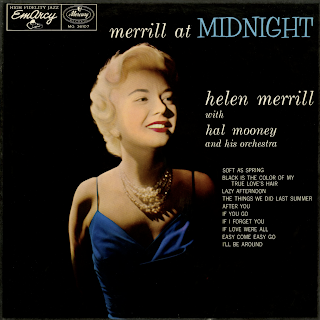 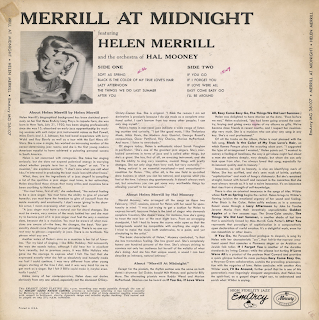 From the back jacket:

Helen Merrill's biographical background has been sketched previously on her first three EmArcy Long Plays. In capsule form, she was born in New York, July 21, 1930; has been singing professionally since she was 15; absorbed an early jazz apprenticeship by working sessions with such major jazz instrumental voices as Bud Powell, Miles Davis and J.J. Johnson; has had band experience with the Earl Hines All-Stars. She is now a single; has worked an increasing number of the career-determining jazz rooms, and she is the first young modern American vocalist to have achieved a pulsating personal success in South America.

Helen is not concerned with categories. She takes her singing seriously, but she does not expend polemical energy in worrying about whether people term her a "jazz singer" or not. "I'm a musician," she explained succinctly. "I don't care what you call what I do; I'm interested in producing the best music I can with what I have."

What, then, are the ingredients of a jazz singer? In compiling a list of the qualities a jazz singer must have, in her estimation, Helen described those virtues that many critics and musician have been ascribing to Helen herself.

"You must have, first of all," she underlined, "the natural feeling to be a jazz singer. You must have the ability to give yourself honestly; you must have the freedom to give of yourself from the inside musically and emotionally. I don't mean 'giving' in the showbiz sense; I mean expressing what you really feel.

"A jazz singer must have a natural ear for chord changes. She must be aware, very aware of the music behind her and she must try to become part of it. A jazz singer must feel the way a musician does, because she is a musician. You must be aware of what musicians are aware of – the lines, the changes, the beat. Your personality should come through in your phrasing. There is no one correct way to phrase – especially in jazz. There is no textbook. You phrase what you are."

Another index of Helen's aims as a musician is her list of favorites. "For my kind of singing, I like Billie Holiday. Not necessarily the way she sounds today, although I did hear her in excellent form recently; but in previous years, it was Billie Holiday who gave me the courage to express what I felt. The fact that she made me feel I could continue. I was very different from other young singers starting at the time I did, and it was very hard for me to get work as a singer. But I felt if Billie could make it, maybe eventually I could."

Unlike many of her contemporaries, Helen does not derive obviously from any one school, especially not the dominant O'Day-Christy-Connor line. She is original. "I think the reason I am not derivative is precisely because I do use music as a complete emotional outlet. I can't borrow from too many other people; I can only sing myself."

Of singers today, Helen is enthusiastic about Sarah Vaughan in particular. "She's one of the greatest jazz singers. She's over-looked sometimes in terms of jazz and is called other things, but she's a giant. She has, first of all, an amazing instrument, and she has the ability to sing very inventive, musical things with pretty changes. She not only sings them very well, but very naturally."

Being natural is an essential vocational – and avocational – condition for Helen. "This, after all, is the one field in so-called show business in which you can be natural, and express what you feel at the time. I always sing spontaneously. It doesn't always work out, but sometimes you can get some very worthwhile things by allowing yourself to be spontaneous.

About Helen Merrill by Hal Mooney

Harold Mooney, who arranged all the songs on these two February, 1957, sessions, scored for Helen with her need for spontaneity in mind: "I was just trying to get a cushion for Helen to express herself, because Helen is the kind of singer who demands complete freedom. She doesn't know, for instance, how she's going to treat the next bar or the next eight bars. From an arranging standpoint, I felt I had to leave the scores wide open so that the backgrounds would be compatible with anything she might do. I tried to make the music both unobtrusive, to a point, and yet stimulating to the artist."

"The basic characteristics of Helen," Mooney concluded, "is that she has tremendous feeling. She has great soul. She's completely honest one hundred percent of the time. She's always striving to convince not only her audience but herself of the validity of what she's doing. And she has that unique sound, a sound I can best describe as intimacy, natural intimacy."
Soft As Spring
Black Is The Color Of My True Love's Hair
Lazy Afternoon
The Things We Did Last Summer
After You
If You Go
If I Forget You
If Love Were All
Easy Come Easy Go
I'll Be Around
Posted by By Mark Betcher at 3:55 PM