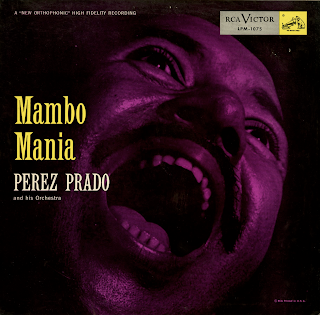 From the back cover: In addition to the music and the way it is played, it is the instrumentation of the Prado band that sets it in a very special class of its own. To four saxes, four trumpets, one trombone and bass, three percussionists are added to keep the beat rocking, to keep it on its steady upward climb. There is a regular drummer with the usual assortment of bass drum, snare and cymbals, but there are also both a conga and bongo-drummer, adding that special Latin sound without which Prado would not be Prado.

From Billboard - January 29, 1955: Perez Prado was one of the ringleaders in the swing-over to mambo rhythms in the Latin-American field last year, so his name on a mambo package is bound to pack extra sales appeal. A "mad" candid closeup of the mambo king adorns the cover, and it's eye-catching enough to account for additional sales. Prado is one of the better mambo exponents around today, and this LP features 12 of his best selections, including his own "Marilyn Monroe Mambo," "St. Louis Mambo" and "Skokiaan."