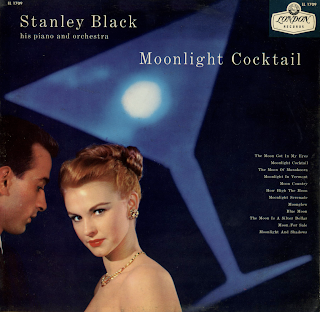 From the back cover: For Stanley Black, as it did for all of us, it started with piano lessons. But it soon became apparent that Stanley was no ordinary pupil. He was not merely a model student, he was gifted and from the performance of music to composition was for him a short and easy step.

At the age of twenty-three he broke into the highly-competitive world of film music. It was an open door to success and many men would have been content to confine themselves to this field alone. Stanley has continued his association with the screen right up to the present time but nowadays his commissions in the film world are only one of the outlets for his many musical accomplishments.

At the outbreak of war, Stanley Black was quick to join up, leaving as he thought, the world of music behind him. But once in the R.A.F. he was soon conscripted into applying his unique talents to the entertainment of his fellow servicemen. Upon his release from the services the possibilities seemed so numerous that at first it was difficult to choose between them. After a brief period of free-lancing, however, he was signed up as conductor of the B.B.C. Dance Orchestra, an appointment which lasted until 1952. Stanley Black's work for the B.B.C. was recognized in 1951 by his selection to appear with his orchestra in the Royal Command Variety Performance.

The Moon Got In My Eyes
Moonlight Cocktail
The Moon Of Manakoora
Moonlight In Vermont
Moon Country
How High The Moon
Moonlight Serenade
Moonglow
Blue Moon
The Moon Is A Silver Dollar
Moon For Sale
Moonlight And Shadows
Posted by By Mark Betcher at 5:17 PM