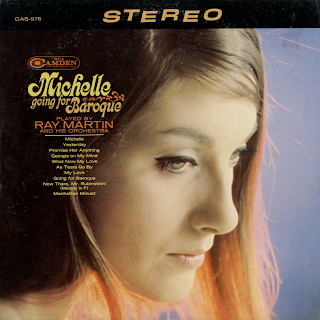 Another fine mid-60s pop release from one of my favorite space age arrangers, Ray Martin.

From the back cover: Baroque emerged from the classical, mid-European centers of culture – from Italy and Austria. Of course that was back in the 1700 - 1800s. Ray Martin emerged from the very same background. He wafted his way out of Austria in 1938, polished English mannerisms and modern sounds in London and Liverpool and on the B.B.C. until 1957. Since then he has been charged up with the contemporary.

Michelle
What Now My Love
Georgia On My Mind
As Tears Go By
Going For Baroque
Yesterday
Promise Her Anything
Manhattan Minuet
My Love
Now There, Mr. Rubinstein! (Melody In F)
Posted by By Mark Betcher at 4:11 AM