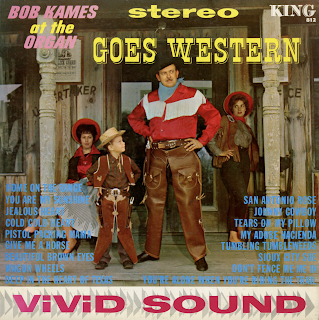 From the back cover: This, then is Bob James latest album, recorded in the King Record studios in Cincinnati, Ohio, in September of 1962. It is our belief that this album represents Bob Kames at his very best and we believe that the recording techniques used to capture the magnificent tone qualities and sound of the newest model Hammond Organ has resulted in an album which is truly unique and different.

Arrangements were made with the Hammond Organ factory to borrow the very latest model for the recording date. A special technique was worked out whereby a total of seven microphone were used to capture the full sound spectrum and harmonies produced from the two organ speakers – one Hammond speaker and one Leslie. The two speakers were isolated by special sound baffling so that a complete separation between the two speakers could be obtained for special stereo effects.

The idea to have Bob Kames record a country music album was inspired by the great Ray Charles album, "Modern Sounds In Country And Western Music". Once it was decided that this would be at the album theme, many hours were spent in researching the songs to be recorded. Following Bob's theory of recording music "for the people", the selectors were finally reduced to sixteen. The normal length for most LOs is twelve tunes, but Bob felt that it was impossible to cut the list any more, so all sixteen songs were recorded and included in this album.

San Antonio Rose
Jealous Heart/Cold Cold Heart
Tumbling Tumbleweeds
My Adobe Hacienda
You're Alone Wen You're Riding The Trail
Home On The Range
You Are My Sunshine
Wagon Wheels
Beautiful Brown Eyes
Don't Fence My In
Sioux City Sue
Tears On My Pillow
Give Me A Horse
Deep In The Heart Of Texas
Johnny Cowboy
Posted by By Mark Betcher at 1:27 PM