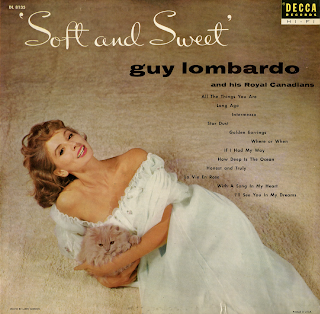 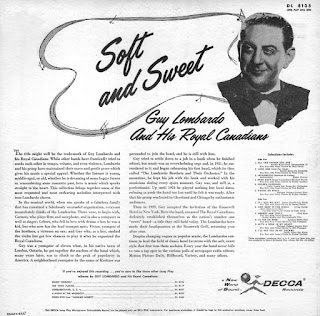 From the back cover: In the musical world, when one speaks of a fabulous family that has remained a fabulously successful organization, everyone immediately things of the Lombardos. There were, to begin with, Carmen, who plays flute and saxophone, and is also a composer as well as singer; Lebert who fell in love with drums when he was a kid, but who now has the lead trumpet spot; Victor, youngest of the brothers, a virtuoso on sax; and Guy who, as a boy, studied the violin but got few chances to play it after he organized the Royal Canadians.

Guy was a youngster of eleven when, in his native town of London, Ontario, he got together the nucleus of the band which, many years later, was to climb to the peak of popularity in America. A neighborhood youngster by the name of Kreitzer was persuaded to join the band, and he is still with him.

Guy tried to settle down to a job in a bank when he finished school, but music was an overwhelming urge and, in 1921, he surrendered to it and began rehearsing his first band, which he then called "The Lombardo Brothers and Their Orchestra." In the meantime, he kept his job with the bank and worked with his musicians during every spare moment. Guy was, and still is, a perfectionist. Up until 1924 he played nothing but local dates, refusing to push the band too fast until he felt it was ready. After that his group was heard in Cleveland and Chicago by enthusiastic audiences.

Then in 1929, Guy accepted the invitation of the Roosevelt Hotel in New York. Here the band, renamed The Royal Canadians, definitely established themselves as the nation's number one "sweet" band – a title they still hold today. The Lombardos have made their headquarters at the Roosevelt Grill, returning year after year.

All The Things You Are
Long Ago
Intermezzo
Star Dust
Golden Earrings
Where Or When
If I Had My Way
How Deep Is The Ocean
Honest And Truly
La Vie En Rose
With A Song In My Heart
I'll See You In My Dreams
Posted by By Mark Betcher at 9:13 AM