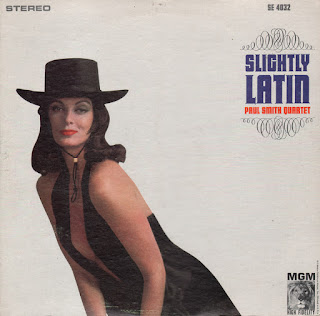 From Billboard - February 2, 1963: This is a smooth individualistic tour-de-force for Paul Smith and the other members of his quartet. The feeling is "commercial Latin" (various rhumba and bolero tempi), but the numbers run all over the hemisphere, from Lecona's "Malaguena" to the R&H "Surrey With The Fringe On Top." Smith is front-and-center as the album's star on piano, celeste, electric organ and the slick backing, and percussion work is all he could ask for. A nice platter for middle-road radio programmers.

From the back cover: Paul Smith is the Stan Musial of popular music: a versatile, reliable, inventive performer whose very presence on any record date is invaluable. A native Californian (he was born in San Diego), the 40-year-old keyboard master has had experience in many facets of the music whirl. His father, a trumpeter, and mother, a vaudeville performer, provided the initial impetus. At age 19, Smith was a member of Johnny Richards' band. A year later, in 1942, he joined veteran Ozzie Nelson's crew. Summoned to army service in 1943, he served as an MP with our forces in Germany, doubling with a band headed by trumpeter Ziggy Elman. After the war, Smith returned home, to work with Les Paul's trio, as accompanist to the Andrew Sisters and with Tommy Dorsey's band. In 1949, he decided to settle in Hollywood, probably the wisest decision he ever made.

Few musicians have become as sought-after as Smith in Hollywood's diversified circles. On assorted keyboards (piano, organ, harpsichord and celeste), he's become a stalwart on many radio and TV shows originating in Hollywood (occasionally he can be seen on camera backing Dinah Shore on that kiss-dispenser's television show).


On innumerable record dates, from jazz sessions to large orchestra pop tapings, he's been the pianist whose skill enables him to match perfectly with the chosen setting. On his own time, when the demand for his services abates (and that rarely occurs), he's fronted his own combo, in person and on records. In recent years, he's taken time off to server as accompanist to Ella Fitzgerald. The fact that he fulfilled the duties of that assignment so well provides added endorsement of his artistry; few musicians could satisfy the requirements of the Queen of jazz singers and those of the radio-TV production executives.

Malaguena
When I Fall In Love
The Desert Song
My Romance
My Reverie
Promises
Saturday Night
Palos Verdes
I Could Write A Book
For All We Know
Surrey With The Fringe On Top
You Stepped Out Of A Dream
Posted by By Mark Betcher at 8:13 AM