This Love Of Mine - Eddie Baxter 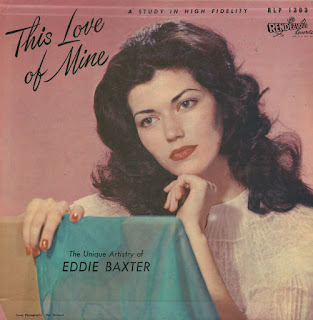 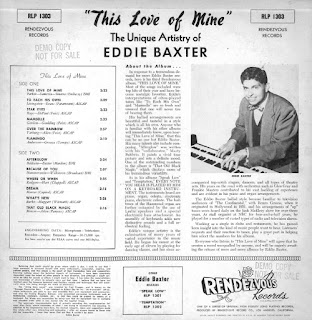 From the back cover: As in his albums "Speak Low" and "Temptation," Every note you hear is played by him on a keyboard instrument. The instruments heard are piano, organ, celeste, electronic piano, electronic celeste. The lush tones of the Hammond organ are further enhanced by the use of Leslie speakers and a special electronic bass attachment. An assembly of keyboards adds new distinctive sounds and a full orchestral feeling.

Eddie's unique artistry is the culmination of many years of varied experience in the music field. He began his career at the early age of eleven by playing for dancing classes, and has since accompanied top-notch singers, dancers, and all types of theatre acts. His years on the road with orchestras such as Glen Gray and Frankie Masters contributed to his vast backlog of experience and are evident in his piano and organ arrangements.

The Eddie Baxter ballad style became familiar to television audiences of "The Continental." with Renzo Cesana, when it originated in Hollywood in 1951, and his arrangements of "up" tunes were heard daily on the Jack Elroy show for over three years. As a staff organist at NBC for four-and-a-half years, he played for a number of varied types of radio and television shows.

Working as a single in clubs and restaurants he has gained keen insight into the kind of music people want to hear. Listeners' requests and their reaction to tunes, play a great part in helping him select the numbers for his albums.

This Love Of Mine
To Each His Own
Star Eyes
Mamselle
Over The Rainbow
Flamingo
Afterglow
Because Of You
Where Or When
Dream
What's New
That Old Black Magic
Posted by By Mark Betcher at 4:59 AM