An Evening At The Pump Room - David Le Winter 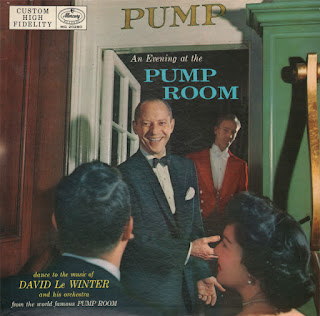 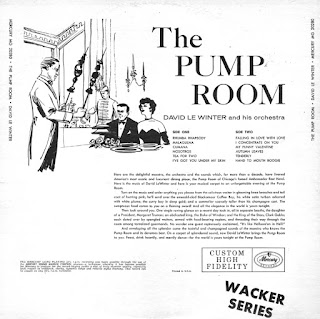 From Billboard - November 25, 1957: As a society band maestro, Le Winter is well known in the Chicago area. For that reason, this set, which is another in a growing series of society packages, can do a brisk business there with the expectancy of buy minor action elsewhere. Current competitors outdo this in both quantity of tunes and liveness of sound. A doubtful addition to inventory.

Competition in the 1957 market would be heavy, but this LP is as good as many piano driven big band club room sets found in stores at the time. The album's theme, music that was actually performed at The Pump Room, is probably why the reviewer felt that the sound lacked "liveness" in that some arrangements seem "soft" or the set lacks stylistic drive because the music was meant as dinner entertainment and not for the concert hall.  If Le Winter had strayed from his authentic dinner club sound then the album theme would have made no sense and his Chicago market would have been turned off.

Rhumba Rhapsody
Malaguena
Cumana
Nosotros
Tea For Two
I've Got You Under My Skin
Falling In Love With Love
I Concentrate On You
My Funny Valentine
Autumn Leaves
Tenderly
Hand To Mouth Boogie
Posted by By Mark Betcher at 7:47 AM