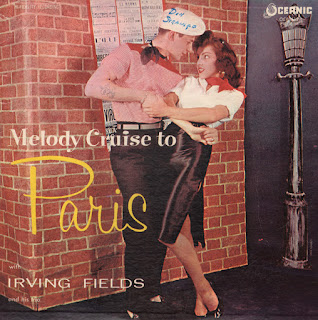 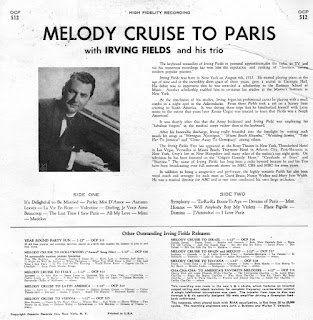 Songs are arranged into a continuous medley per side, played through as you would likely have heard the Trio perform them in a club.

From the back cover: The keyboard versatility of Irving Fields in personal appearances on the radio, in TV and via his numerous recordings has won him the reputation and ranking of "foremost among modern popular pianists."

Irving Fields was born in New York on August 4th, 1915. He started playing piano at the age of nine and in the incredibly short space of three years, gave a recital in Carnegie Hall. His debut was so impressive that he was awarded a scholarship to the Eastman School of Music. Another scholarship enabled him to continue his studies at the Master's Institute in New York.

At the conclusion of his studies, Irving began his professional career by playing with a small combo in a night spot in the Adirondacks. From there Fields took a job on a luxury liner cursing to South America. It was during these trips that he familiarized himself with Latin music to the extent that years later Xavier Cugat was amazed to learn that Fields was a North American!

It was shortly after this that the Army beckoned and Irving Fields was employing his "fabulous fingers" in the medical corps rather than at the keyboard.

After his honorable discharge, Irving really bounded into the limelight by writing such smash hits songs as "Managua, Nicaragua," "Miami Beach Rhumba," " Wedding Samba," "Take Her To Jamaica" and "Come Away To Comaguay" among others.

The Irving Fields Trio has appeared at the Roxy Theatre in New York, Thunderbird Hotel in Las Vegas, Versailles in Miami Beach, Traymore Hotel in Atlantic City, Park-Sheraton in New York, Gray's Inn in New Hampshire and many other of the nation's top night spots. On television he has been featured on the "Colgate Hour," "Cavalcade Of Stars" and "Startime." The name of Irving Fields has long been a radio byword because he and his Trio have been broadcasting over full network shows on NBC, CBS and MBC for some years.

In addition to being a songwriter and performer, the highly versatile Fields has also been vocal coach and arranger for such stars as Carol Bruce, Nancy Walker and Mary Jane Walsh. He was a musical director for ABC and at one time conducted his own large orchestra.