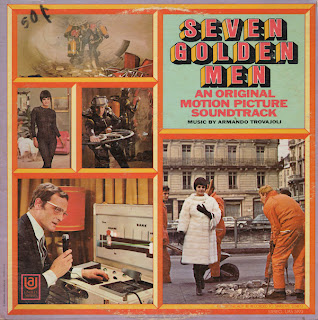 This is a French film that premiered in New York in 1969 (which is how I dated the album release). The film was distributed by Warner Bros – Seven Arts. However, sources list the actual release date as 1964 (original foreign release).

I haven't seen the movie, but apparently the movie is a "James Bond" styled heist caper.

The music is a blend of spy/secret agent whackiand light 60s pop.  It has a distinct "European" sound. The LP audio is simulated stereo. The recording plays a lot more like a straight album then a sound track. The record is a hell of a lot of fun.

I could only find several CDs (import) copies available online. They are hard to find. There were a number of vinyl copies on ebay when I searched today.
Posted by By Mark Betcher at 5:24 PM