The Fortune Tellers - Song Of The Nairobi Trio 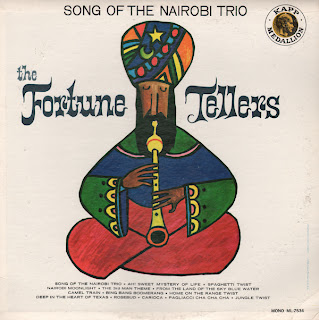 Here's a terrific space age LP. The music reminds me a touch of The Three Suns but with a big helping of light pop humor.

The main character behind The Fortune Tellers is Robert Maxwell. He wrote many of the tunes found on this album, including the sample I've posted above and the Song Of The Nairobi Trio that Ernie Kovacs used as the theme for his television show.

He may be best known as an innovative harpist. I've blogged a number of his albums here in The Atomic Attic. He used some of the same experimental techniques pioneered by Ferrante and Teicher in their early work. At least one song on this album reflects that sound. For his nightclub act, in the late 50s, Maxwell wired his harp to a light display that changed in synchronization with his playing.

There are some great tunes on this LP!