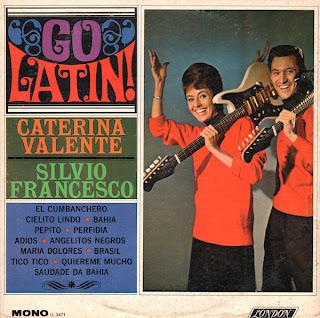 This album is available on CD, so I won't be posting a sample.

Good stuff from a sister/brother act. Valente made an absolute pile of records, releasing albums in many countries. For exotica fans there is a nice cover of Brasil (that is how it is spelled on the back cover).

The songs are performed in Spanish and Portuguese. The overall vibe is a nice loose almost lounge feel with a touch of 60s light pop. A nice addition to the Atomic Attic Collection.
Posted by By Mark Betcher at 4:25 PM