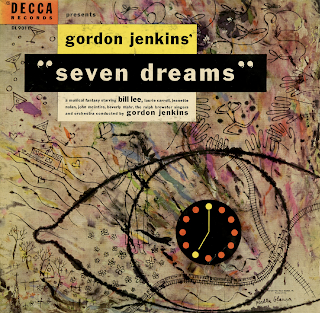 From the back cover: About Gordon Jenkins. Born in Webster Groves, Missouri, Gordon Jenkins is famous in the triple role of bandleader, arranger, and composer. In 1950 he moved into the list of the nation's top ten best-sellers with five of his records at once. Because Jenkins had learned to play practically every instrument, he was a master of orchestration, his works having been used with great effect by such leaders as Whiteman, Goodman, and Kostelanetz. As a composer he is known not only for the celebrated "Manhattan Tower," but for the almost equally colorful "California," "Blue Prelude," "San Fernando Valley," among others. There is no question, however, that, to date, "Seven Dreams" is Jenkins' most ambitious as well as his most accomplished work.

From Billboard - October 31, 1953: Tho Decca is mapping a strong promotion campaign behind the new Gordon Jenkins album, "Seven Dreams," the strategy is to restrict air play of the extended work and thus eke out maximum impact during occasional authorized spins. The same technique was used successfully with Jenkins' "Manhattan Tower" of several years back, which only recently has been removed from the restricted list.

The work, a blend of symphony and modern cantata, using soloists, chorus, narrator and large ork, runs for 51 minuets. Decca branches and distributors have been authorized to solicit only a single, complete performance in their respective territories. Any subsequent plays must be cleared with Decca headquarters.

The opus is held in Gordon Jenkins, Inc., affiliated with the American Society of Composers, Authors and Publishers. The restriction, of course, does not apply to the Jenkins single waxing of the "Seven Dreams Theme" already released.

The album moves out to the field next week, with its debut supported by extensive trade and consumer advertising. Elaborate display aids are being provided to dealers via distributors.

The Professor
The Conductor
The Caretaker
The Cocktail Party
The Pink House Boat
The Nightmare
The Girl On The Rock
Posted by By Mark Betcher at 9:06 PM