Come On Everybody Let's Twist! 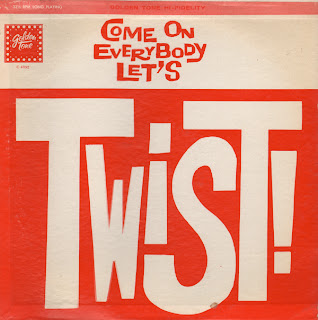 Songs are credited to Sanford Bellini. Steven Garrick is credited for piano, organ, celeste, vibraphone and conducting and arranging. Seymour Salzberg is credited for drums and percussion. Louis Messana for solo guitar. Larry Lucie for rhythm guitar. Abie Baker for bass and Paul Gaglio for saxaphone.

I can only comment on side one... because the pressing on side two was so awful... that the needle simply slides across the record half way through the first track. I've never seen anything like it… Basically, the grooves on side two aren't deep enough to hold the needle! LOL!

Looks like I need to find another copy!
Posted by By Mark Betcher at 6:16 PM