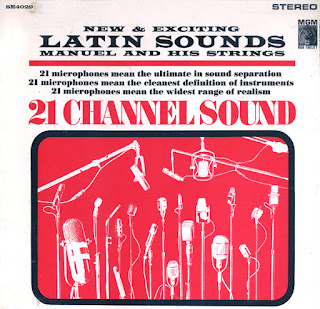 The 1962 October issue of Boys Life reviewed this album in a feature titled "Platter Chatter". They love the set mentioning that the recording featured the "...cleanest definition of instruments and the widest range of realism".

This album would be MGM's attempt to play catch up with trends that Enoch Light/Command label instigated in the early 60s. The jacket is a Command "styled" book-fold featuring in-depth copy covering the "21 Channel Sound" process and the song choices.

The set goes light Latin pop augmented by "ping pong" stereo effects (another trend Command started). The stereo fireworks, on this album as on many similar efforts of the day, are a tad annoying for a 1962 release when effects had, for the most part, been well explored.

Ping-Pong aside, the engineering is excellent (as good as any Command record I've heard). The sound is "clean" and well defined. Interesting how MGM marketed the album as "21 Channel" when they were using two 12-channel mixers. They did, however, use 21 microphones.

From Billboard - April 28, 1962: Three fine sound sets (including MGM SE4029) in the new MGM 21 series line. They combine crisp reproduction with a fine danceable beat. Manuel does percussive things with his strings. Each set has fine sweet programming fare.

Cachita
Yours
The Bandit
Primera
Jealousy
Amor Amor
Anema E Core
The Breeze And I
Carnavalito (Festival Of Flowers)
Adios
Posted by By Mark Betcher at 3:48 AM