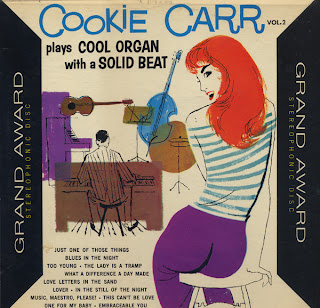 I can't find any info on Cookie Carr. Al Caiola plays the guitar and steals the spotlight. Enoch Light originated and produced the album. You can hear a bit of that Enoch Light "ping-pong" sound happening.

Grand Award was a modestly successful Light label that preceded and then apparently continued along with his Command label operation. Grand Award (Light) marketed "Phase X" technology which let listeners hear a "phantom" third channel in between the standard left and right channels. This was a common recording technique, but Light was the first person to market it (perfection... in spectacular stereophonic sound).

Grand Award LPs were phased out by 1961, but the label name was kept for reissues at least until 1966. I can't date this album although it sounds, for sure like a 1960 or 61 recording.

As usual the engineering is excellent.
Posted by By Mark Betcher at 8:23 PM