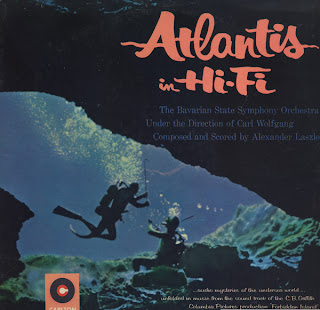 This is the Forbidden Island (C. B. Griffith's/Columbia Pictures) soundtrack album.

From the back cover: Atlantis... the fabled Lost Continent? Atomic Submarines? What fantasies of science fiction have not already become realities?

Sounds like the makings of a great record! The album is lushly orchestrated, but may I suggest Martin Denny's Forbidden Island instead for a more "exotica" adventure.
Posted by By Mark Betcher at 2:57 PM