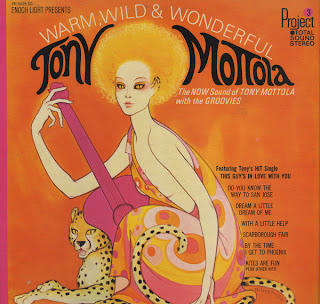 From the inside cover: That "immediate, right now, today feeling" is the NOW Sound that Tony Mottola shows in this album. It's a mixture of a lot of different things. The most unusual aspect is the way he used the Groovies, a four-voice vocal group, who are woven into some of the arrangements in a way that is neither typically vocal nor typically instrumental. Their voices are melded with the arrangements to create musical accents that are part of the unique characteristics of today's music.

"The contemporary music scene does so much with voices," said Tony, "that I knew there were more ways of using them that were still to be explored. That's why I went to Chris Dedrick. He sings with the Free Design and is one of their principal writers. I played on the Free Design's first record for Project 3, which was the first time I ran into Chris, and I was so impressed with what he was doing that I wanted to talk to him about ideas for using voices in the context of one of my albums.

"As the result of these talks," Tony went on, "Chris did several of the arrangements, using voices in a way that I never heard them used before, and backing them up with an interesting little brass band that involves two trumpets, bass trombone and French Horn."

From Billboard - September 28, 1968: Tony Mottola leads the way on bright and sassy instrumental arrangements of tune like his big single of "This Guy's In Love With You," "With A Little Help," and "Do You Know The Way To San Jose." The guitar work of Mottola makes these songs sound entirely new and refreshing.

This Guy's In Love With You
Do You Know The Way To San Jose
Dream A Little Dream Of Me
With A Little Help
Scarborough Fair
Watch What Happens
By The Time I Get To Phoenix
Kites Are Fun
Cry Me A River
Goin' Out Of My Head
Love In Every Room
I Found Love
Posted by By Mark Betcher at 2:27 PM