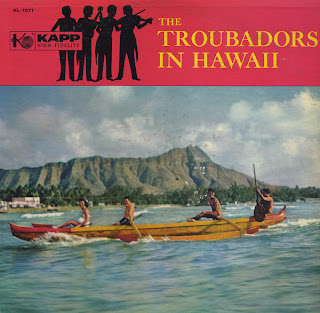 From examples of album covers displayed on the back cover, The Troubadors also visited Rome, Spain and The Land Of The Gypsies. All of the album covers feature the same layout and "branding graphic" as seen in the upper left corner.

Little can be found on The Troubadors. Apparently in 1957 Dave Kapp hired The Troubadors to do a song with Jane Morgan titled "Fascination". The tune became an instant sensation and remained on the charts for 29 weeks.

This is straight forward mood. The sample above is a bit more energetic than the rest of the set and features an interesting "whistling" bridge. This "whistling" bridge also appears in one song found on the B side.
Posted by By Mark Betcher at 3:28 PM