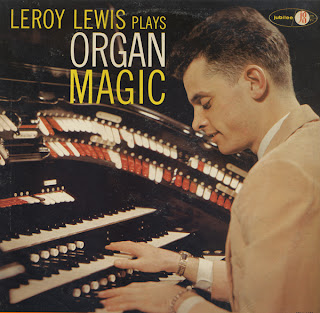 Folk interested New Jersey theatre history might take not of information to be found in the notes, written by Mort Goode.

Leroy Lewis was born in Reading, Pa., May 7, 1935. When he was five he began to play the piano. He had just entered the Gerry Home For Children in Gerry, N.Y. and for the next 17 years learned, without formal musical education, the techniques of piano playing. When he was 12, Leroy and his mother moved to Porland, Ohio. For the next two years he experimented with the pipe organ in the local church, learning, by trial and error, the mechanics, the sounds and effects.

When Leroy was 14 he began playing an electric organ, professionally. That was in a restaurant in Poland... Ohio, of course. The following year he was attending high school in Santa Ann, California and was the organist at the skating rink. After that Leroy was back in Pa. In Allentown he worked on the assembly line at the Allen Organ Company, played the pipe organ in the theatres in the area.

For the past two years Leroy has been seen and heard in Pennsylvania and New Jersey. In 1957 he played electric organ at the Surf City Hotel. At the end of the season the hotel bought the Wurlitzer Theatre Pipe Organ in the Fabin Theatre in Hoboken. Leroy and his technical assistant, Ted Campell, disassembled the organ, moved it piece-by-piece to Surf City, spent the winter putting it back into its compact visual form.
Posted by By Mark Betcher at 6:09 AM